BayCity Strollers over 60s arrived at Gillingham on a high after their success at West Ham. Today however was a different kettle of fish as they pitted their skills and stamina against the best that the over 50’s had to offer in Kent!

The afternoon started on a bright note when the organiser asked BayCity Strollers if they were playing with the veterans or Walking Football!  “Should have gone to Specsavers” was harshly heard from some other players!  On show also was the new kit, which by some amazing coincidence, looked like the Pompey colours! 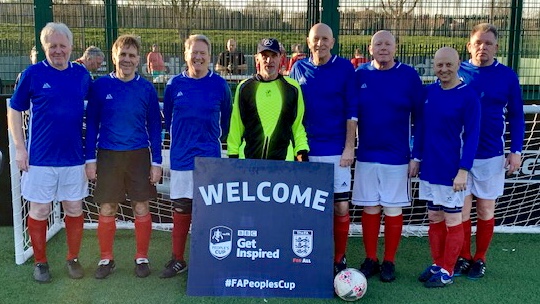 The team sheet had been distributed beforehand, which meant that 3 subs would be used at the half way mark in each match (matches were 8 mins long in total), taking rotation to a completely new level and taxing all the brains of the squad!

BayCity’s first match was against Maidstone B, a tight game which BayCity did well to draw 3-3 , going 1-0 down , 2-1, down and 3-2 down! Scoring the equaliser in the last 10 seconds! Colin, Paul and Peter the goal scorers!

Game 2 was against Medway, another tight game but BayCity coming from behind to win 2-1! Goals from Peter & Paul, Mary was unlucky when she hit the post! (Editor’s note: this last reference lost on anyone under 60….)

Game 3 was a top of the table clash with Ebbsfleet.  BayCity had the better chances and don’t believe Nigel had a save to make! However BayCity couldn’t find the back of the net and the game ended 0-0.

The last game – against Margate – was yet another where BayCity went 1-0 down! Eventually coming out comfortable winners 4-1. Goal scorers were Mick (2 stunning goals, having eventually turned up), Peter and a pile-driver from Jim!

That win put BayCity into the semi finals against the favourites Maidstone A. The first half saw BayCity go 2-1 up with another couple of stunning goals from our new sharp shooter Mick (playing in his first tournament)! Maidstone were looking really worried as I believe it was the first time in the tournament they were behind. Just when BayCity were getting their hopes up to reach the final , disaster struck. Terry passed what looked like an innocuous back pass to Nigel in goal, however somehow the ball crept into the corner of the net. This seemed to throw BayCity completely off their guard and a couple of wayward passes and they were 5-2 down in the blink of an eye! The score line was not a true reflection of the way BayCity played for most of the game. The only consolation was the fact they went out to the eventual winners of the tournament!

BayCity Strollers over 60’s could hold their heads high having come through the group stages undefeated! The teamwork, style of football, never-say-die attitude and fitness of the entire squad was amazing! At the end of the tournament BayCity came off the pitch with smiles on their  faces and their heads held high!

All bodes well for the upcoming national league!

(A quick mention and thanks to Bruce who kindly sacrificed himself to play  for the over 50’s squad.)